Bar graphs are an easy way for young children to sort and keep track of different items. Bar graphs also give kids a simple way to compare different groups of items since they can estimate how many of each item they have observing how tall each column on the bar graph is. These bar graph worksheets will challenge your child to create bar graphs and to correctly read bar graphs, as well as answer questions about the information depicted on the bar graphs. 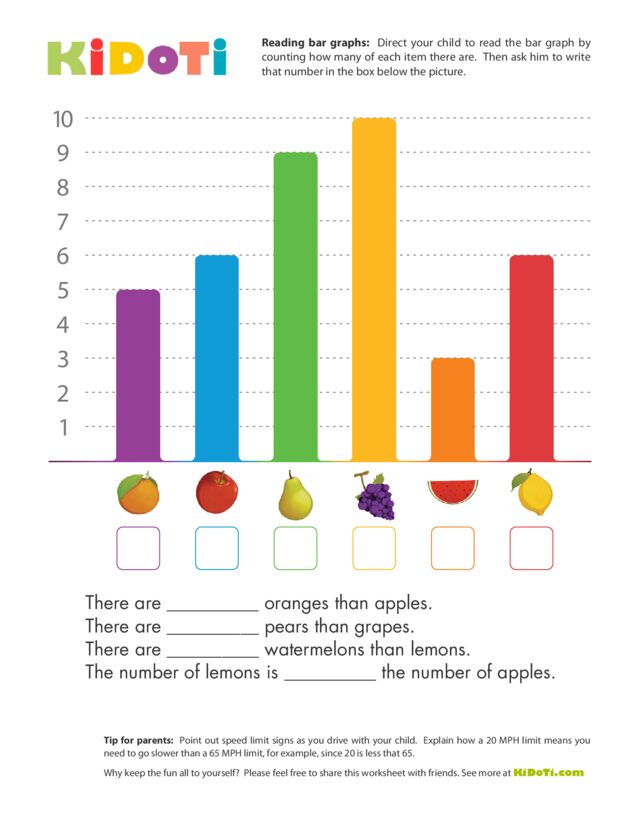 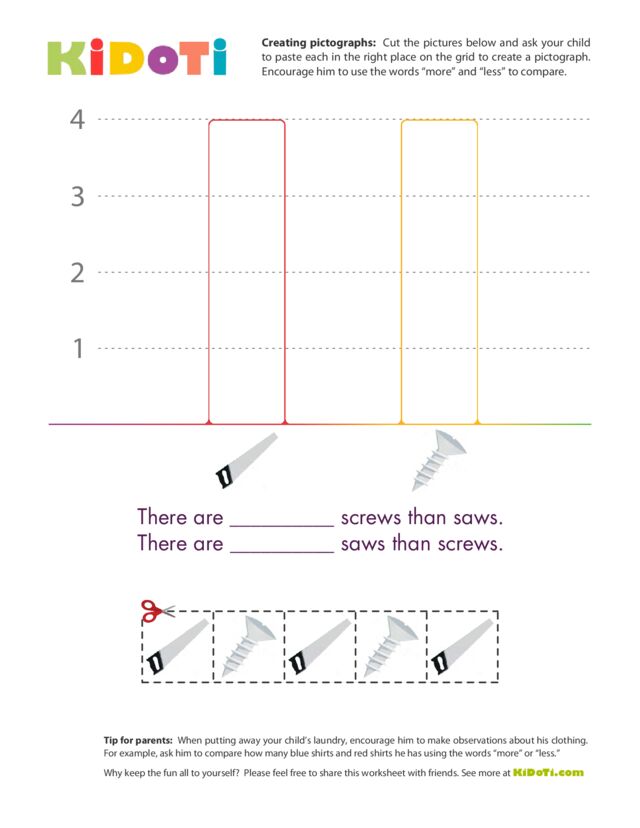 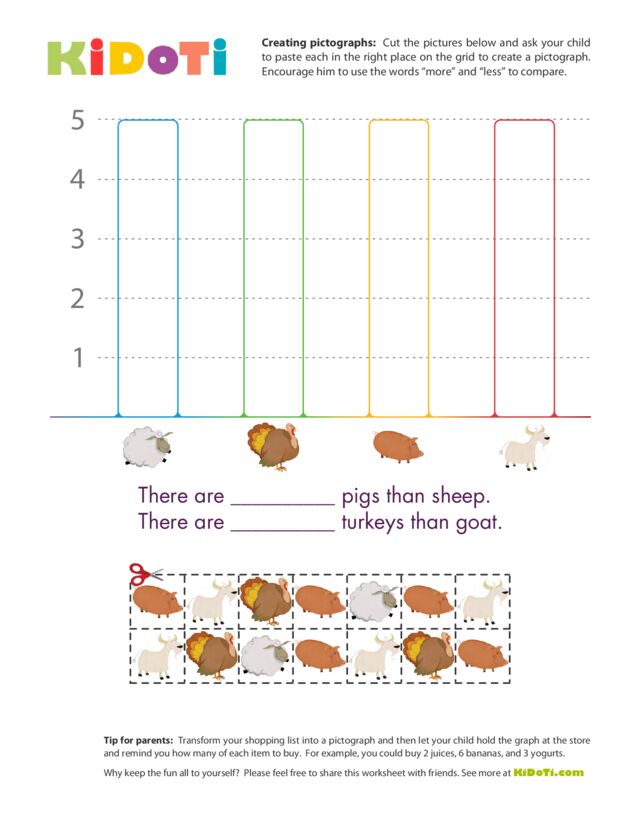 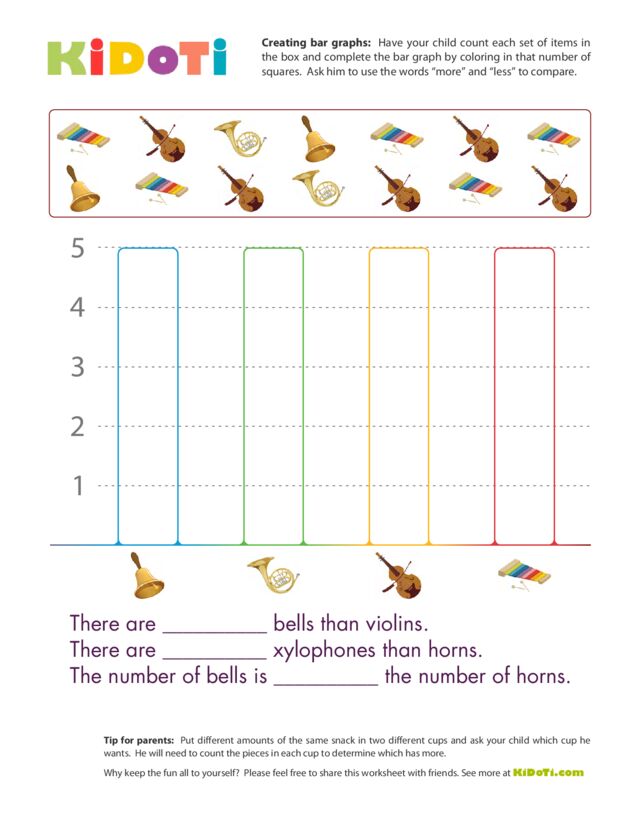 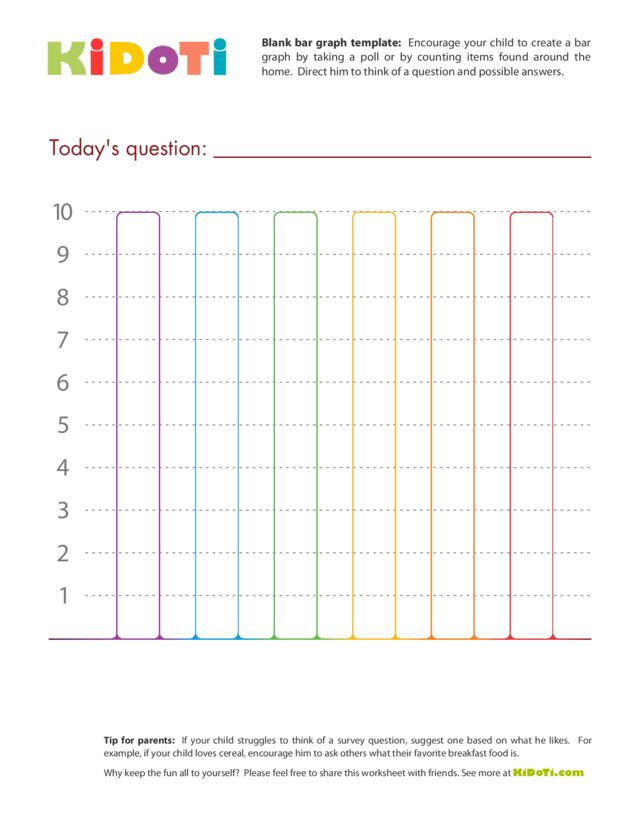 Pictographs are a basic form of bar graph that are especially simple for young children to create and understand. With their colorful pictures and simple directions, pictographs will help children learn the basics of graphing. These pictograph worksheets will encourage your child to make his own pictograph by cutting apart the pictures at the bottom of the page and then pasting each picture into the correct column on the graph.

A pictograph (sometimes called a pictogram) is a special type of graph that uses pictures or symbols to represent information. Because pictographs do not require any words or numbers, they are perfect for young children who cannot yet read or who are not yet comfortable identifying printed numbers and matching them to the amounts they represent.

Pictographs are an important part of a preschool or kindergarten math program because they are an easy way for children to learn about bar graphs and the important role bar graphs play in organizing and tracking the amounts of different items.

More about the importance of bar graph worksheets

Bar graphs are an easy way for children to quickly compare different groups of items. By putting the different items along the horizontal axis of the bar graph and the number of items along the vertical axis of the bar graph, children can estimate how many of each item is depicted by observing how tall the column is. Also, children can count the exact number of items either by counting each individual block in the column or by observing the number on the left of the graph that corresponds to the height of each column.

Encourage comparisons. When putting away your child’s laundry, encourage him to make observations about his clothing. For example, ask him to compare how many blue shirts and red shirts he has using the words “more” or “less.” Also encourage your child to use the descriptive words “more than” and “less than.” For example, at snack time ask him if he would like more cherries than crackers or more crackers than cherries. Being comfortable using these comparative terms will help him explain what he sees as he looks at pictographs.

Activities to try at home to supplement the graphing worksheets